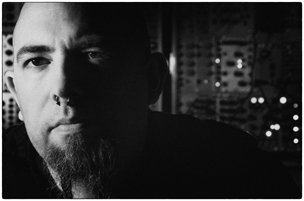 Chvad SB has been performing and recording music since 1991 and has played with a wide range of innovative and envelope-pushing bands. His experiments focus on finding new sounds and textures, but always with a human edge. Using a wide variety of instruments including modular synthesizers, found objects, hand-built instruments, guitars, and voice, Chvad SB builds soundscapes that are as unsettling as they are familiar. Chvad SB has just completed his first collection of dark-ambient solo recordings titled Crickets were the Compass.

1. Ministry - Jesus Built My Hotrod (Redline/Whiteline Version) (single, 1991)
This song changed everything for me. I was DJing at my college radio station and the single for Jesus Built My Hotrod was sitting on a stack of discs that needed to be played that night. The next morning I sold everything I had of value to a pawn shop and bought a my first keyboard, distortion pedal, microphone and tape deck. This song re-ignited my creative ambitions that, at the time, had been squelched by a flaccid public school system lacking anything in the way of creative nourishment.
2. DEVO - Race of Doom (from New Traditionalists, 1981)
My Oma introduced me to DEVO with this album. This record saved me from religion.
3. New Order - Your Silent Face (from Power, Corruption & Lies, 1983)
Every set I played at my college radio station ended with this song. This song exists in some other space. I'm still not sure what to make of it. So dry and barren and sad and still lush and pretty. After buying Power, Corruption & Lies I didn't buy another New Order record for at least a decade. I couldn't stop listening to it. I didn't want anything else from them.
4. Howard Shore - Crash (from Crash, 1996)
The opening chord from the first track sucked me in forever. This soundtrack opened up a place in my mind I've been trying to keep filled ever since hearing it. Perfect moods. Perfect tones.
5. Einsturzende Neubauten - Haus Der Lüge (from Strategies Against Architecture II Disc 2, 1991)
The raw pounding of this song live is unstoppable. Like Jesus Built My Hotrod, this song manages to tap into the nastiest visceral place in my heart.
6. Faith No More - Epic (from The Real Thing, 1989)
I was working in a Pizza Hut when I first heard this playing in the background on the radio and loved it immediately. I had no idea when that door was opening what kind of eclectic impact Faith No More would have on my creative endeavors later in life.
7. The Kinks - Destroyer (from Give the People What They Want, 1981)
When I was eight years old I would sit on the floor in the dining room by myself listening to my dad's radio when the rest of the family was watching TV in the next room. When I first heard this song it terrified me. It was so raw and hard. Decades later it still scares me. For years I wanted to do a version of this but I just don't think I could do anything cooler with it. I just want to steal its crazy energy and run away with it but that wouldn't be fair to the song.