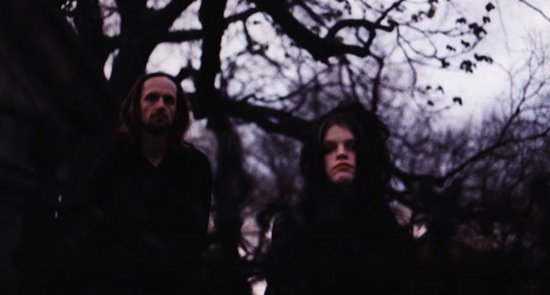 Lycia is a darkwave gothic-rock band that was formed in 1988 in Arizona, notable for being one of the ground breaking groups in darkwave and ethereal wave styles. Lycia's music is characterized by rich soundscapes and layers of echoed guitars, dark and ethereal keyboards, doomy drum machine beats, VanPortfleet's melancholic, whispered vocals and Vanflower's vivid voice. The following playlist has been compiled by Tara Vanflower.

1. Hee Haw - Where Oh Where Are You Tonight
I grew up listening to only country music. My parents listened to it and we watched all the variety shows on tv. Hee Haw being one that particularly sticks out in my head. So, I will use this song as the summation of my childhood.
2. Circle Jerks - Patty's Killing Mel (from VI, 1987)
This was the first "punk" music I got into because my cousin Karyn sent me a dubbed copy of VI and my friends and I thought we were cool going around school singing these lyrics. It was my gateway song.
3. The Cure - Lovesong (from Disintegration, 1989)
This song changed my life. I was a late comer to "cool" music so this was the first song by The Cure I was really made aware of and it changed who I was fundamentally. I became obsessed with The Cure, and through them other post punk bands like Siouxsie & the Banshees, Bauhaus, The Fall, etc. Obsessively watching The Hunger, sitting with friends in the dark listening to Bauhaus, The Cure etc. was how we spent our time. Daydreaming about hot musicians in eyeliner was a way of life.
4. Death in June - The Honour of Silence (from Nada!, 1985)
I listened to this album a lot with friends. Hanging out in dark rooms obsessively listening to this and other bands like Coil, Current 93, Throbbing Gristle, The Tear Garden.
5. Swans - Blood and Honey (from Children of God, 1987)
Swans is another band that changed my life. Once I heard them I had a new bar to measure music by. This band is brilliant from the beginning until now. Perfection. And I wrote Jarboe back in 91 and she wrote me back and it changed something in me. At the same time I was listening to Swans I was also listening to Godflesh and really enjoying the heavier side of dark music.
6. Daisy Chainsaw - Love Your Money (from Eleventeen, 1992)
I'm listing this song because when I heard Katie's voice it most definitely inspired me. My early musical incarnation before Lycia was heavily influenced by her vocal style. I always loved her raw uninhibited and passionate delivery and this was the first track I heard by them. I wasn't sure where to put them in this list numerically because I knew about them earlier but didn't rediscover them until I saw them on Beavis and Butthead again and it would've been around this time frame post Swans / pre Lycia. HAHA Their current band Queen Adreena is also an excellent band.
7. Lycia - Ionia (from Ionia, 1991)
The third band that changed my life. I got a dubbed copy of Ionia from a penpal and the moment the music started I was overwhelmed. So much so I tracked Mike down, thus changing my life. To this day this release invokes something in me I can't explain.