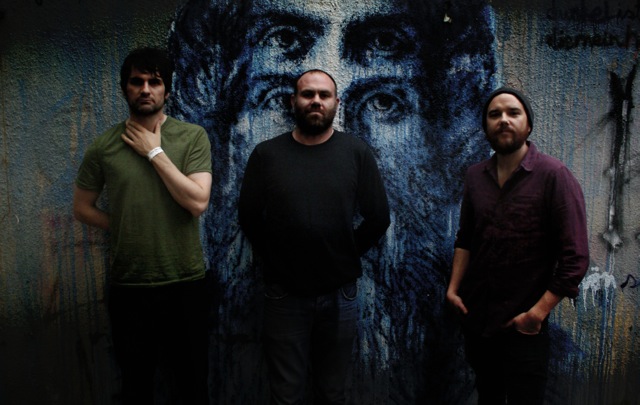 Kerretta is an instrumental three-piece from the hinterlands of Auckland, New Zealand which has enchanted audiences with its rhythmic onslaught since 2006. Described variously as “lead-heavy” with “sparse and beautiful” moments, the trio have carved out a unique brand of dark rock that is scattered with melodic hooks. Fromn September 5th 2014, their third full length LP entitled Pirohia is available worldwide. The following playlist has been compiled by their drummer H.Walker.

1. Dire Straits - Money For Nothing (from Brothers in arms, 1985)
One of the first songs I ever remember hearing. I was 5 years old on a bus from school and it came over the radio. The guitar part at the start got me into long instrumental riffs.
2. Headless Chickens - Gaskrankinstation (single, 1990)
I was 12 when I heard this single. So bleak and raw and all with a slight touch of humour.
3. Shihad - Derail (from Churn, 1994)
I saw them live at a festival in Auckland (NZ) when I was 14. The drumming was methodically tight and punishing while still containing a humanistic groove. Heavy and brilliant.
4. Helmet - I Know (from Betty, 1994)
John Stanier was one of my favourite rock drumers. I heard this track when I was 15 and totally dug how it had this heavy hip-hop type swing and yet sat in the pocket of a drop-d tuned riff. Unfortunately this spawned nu-metal...
5. Aphex Twin - Ventolin (from Ventolin, 1995)
Ventolin was one of the first electronic pieces I could relate to at highschool. Square-waved kick drums and distortion and yet so melodically challenging.
6. John Coltrane - My Favourite Things (from My favourite things, 1961)
John Coltrane is one of my favourite artists. He can take a simple melody line and turn it on it's head so quickly and yet never lose control. Genius.
7. Black Light District (Coil) - Unprepared Piano (from A thousand lights in a darkened room, 1996)
This was one of my all time favourite Coil tracks. Dischordant and yet so musical at the same time. Apparently influenced by John Cage's Prepared Piano.