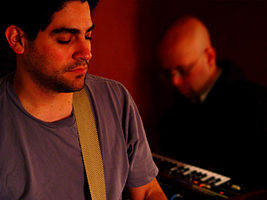 Minnesota's If Thousands began as an experimental music project in April 2000 by Christian McShane (a classically trained vocalist and guitarist) and Aaron Molina (a punk-rock bassist). Neither have had any formal training in the instruments they play in If Thousands. In this way, new soundscapes can be found through a naíve approach to instrumentation. The nature of the project is to continually seek new methods of musical expression through experimentation in order to create outstanding drone oriented music. This playlist has been compiled by Christian McShane.

1. Einsturzende Neubauten - Keine Shoenheit Uhne Gefahr (1987)
First heard this song in 1991. Completely blown away by it's simplicity and intensity. The basic structure is only two notes, but man... what they do with them.

2. Dead Can Dance - Song of Sophia & The Host of Seraphim (1987)
Lisa Gerrard's voice is an otherwordly treasure. If these songs don't hit you in some way, there's something seriously wrong with you.
3. Yes - And You And I (1972)
Not the entire song, just the wonderful mellotron sections. The first one begins around 3:47.
4. Krzysztof Penderecki - Threnody to the victims of Hiroshima (1960)
No electronics. Only orchestra. Incredible. This is a hard piece of music to comprehend. With appropriate visuals, tearful.
5. Godspeed You Black Emporer - The Dead Flag Blues (1998)
Aaron discovered GYBE when we were about to record our first album. When I heard this song, I thought, "Holy shit - someone beat us to it and did a better job than we'll ever do. Crap."
6. Wolfgang Press - I Am The Crime (1986)
Old Wolfgang Press albums, especially Standing up Straight and Bird Wood Cage, have always been an inspiration. if thousands has always been about how the music makes you feel when you listen to it. If I was on a deserted island and had only a couple albums to listen to, WGP would be one of them.
7. Slint - Good Morning, Captain (1991)
After 23 years, this song still kills me.