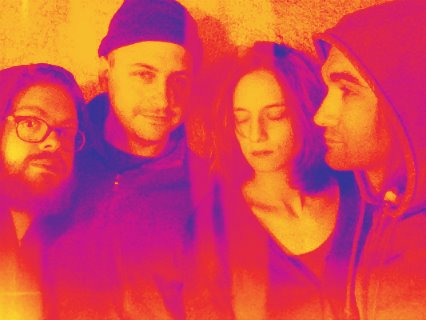 Northern Valentine is a Philadelphia based ambient/drone collective anchored by husband & wife, Robert & Amy Brown. Coaxing sounds from electric & acoustic sources, they weave meditative drones & soundscapes with “barely there” post-rock instrumentation to create a tapestry that Phil McMullen (Terrascope Online) refers to as “minimalist ambiance at its best. Heartfelt, soulful & affecting, like gazing into a scrapbook of memories”. The music they create is largely improvisational & is often performed along with films or visuals that the collective has created.

1. Aphex Twin - #3 ("Rhubarb")
This is an immediate trip to the most serene parts of my mind.
It challenged what I thought music could be and opened me to discovering so many new sounds.
2. Windy & Carl - Sunrise
I spent many nights and days falling asleep, waking up and drifting along to this album, and this song in particular.
Windy's hypnotic bass line slips in perfectly behind layers of Carl's guitar, and you just float for 8 minutes and 33 seconds.
3. Landing - Solstice
With this song, Landing captured a perfect moment in time...and I get lost in the bass line.
The song is a layered balance of order and energy that swells and then disappears, leaving me wanting it to hear more.
4. MONO - Sabbath
I have always admired how much emotion MONO carry in their music. My wife, Amy, walked down the aisle to this song at our wedding. It always reminds me of why I love being with her and making music together.
5. Godspeed You! Black Emperor - Moya
I once watched several strangers begin to openly cry and hug each other, as a number of them were hearing Godspeed You! Black Emperor live for the first time. 17 years later, the movements of this song still give me goosebumps and it makes me want to never stop playing music.
6. Magnog - More Weather
Magnog were not around long enough. I often find parts of this song playing in my head and it sparks me to sit down and just create music in the moment. This song sounds so intentional that it crushes me every time I hear it, and recall that it was improvised.
7. Surface of Eceon - The Open Sea
When you have members of Yume Bitsu and Landing making music in the same space, you get this amazing gem. With the gradual build-up of this song, it always makes me feel like performing live.