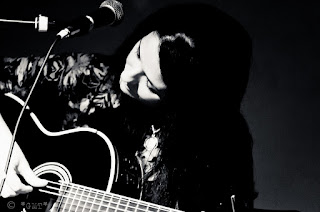 Allysen Callery is self taught folk artist from Rhode Island, USA, with an intricate & unique finger style, & a voice that has been called mesmerizing & angelic. Her first two albums Hopey (2007) & Hobgoblin’s Hat (2010) were self released, but reached an international audience, thanks to radio stations. Her first EPs were released by Woodland Recordings. September 2013 marked Allysen’s 5th release, the full length Mumblin’ Sue on JellyFant Schallplatten. 2014 saw the release of an EP Allysen Callery Folk Radio UK Session.

1. The Incredible String Band - Witches Hat
I was a kid laying on an oriental rug in room filled of incense & furniture from Taiwan, the images in the song reflected where I was , & who I would become. ISB taught me that there need not be chorus verse/chorus verse in every song, but you could just do whatever you wanted.
2. Steeleye Span - Edwin
When I was just picking up guitar as a teenager I was drawn to murder ballads especially, and also wanted to play finger-style as my father had done. I loved how the songs were written on a loop, and that style influenced my songwriting a lot. I also loved how you could tell a compelling story within a song. Later on I recorded a version of this song for my record Winter Island.
3. The Rolling Stones - Lady Jane
The first few bars of this song break my heart, before even the singing starts. I love that music can take us away and make us feel strong emotions, it doesn't matter what language we speak, we can just understand.
4. The Yardbirds - For Your Love
I was 13 and there was a boy I liked, we were hanging out at night in a park and I decided I would sing to him. I sang For Your Love, and a few others...it worked and we ended up making out.
5. Cat Power - Devils Daughter/Troubled Waters
When I was still playing in my bedroom I read an article about Cat Power and looked her up. When she sings she is almost acting, there is so much emotion in her beautiful voice. She played slow, sad songs, and I no longer felt alone. In the beginning most of my set list was Cat Power covers, of covers she had been doing. Cat Power/Chan Marshall made me feel like it could be done . She gave me so much courage.
6. Neil Young - Like a Hurricane
Neil Young was another big influence on my early days of learning guitar, he played easy chords and had simple lyrics , yet went so incredibly deep. It's the way he sings it, with that weird reedy voice, so honest and true.
7. Joni Mitchell - You Turn Me on I'm a Radio
It's always a beautiful sunny day when this song comes on, we're in the car and driving to the beach. We're in love or something close. To me, music is being able to tune into what someone else is all about, sometimes it's static and sometimes it's clear as a bell and you can sing along.