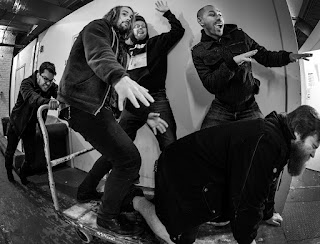 Rosetta is an American post-metal band from Philadelphia, Pennsylvania incorporating elements of post-hardcore, shoegazing, drone, post-rock, avant-garde and ambient. The band somewhat humorously self-describes its music as "metal for astronauts", and its members are very interested in astronomy and space travel. They have just released a new album called Quintessential Ephemera.


1. Oceansize - Women Who Love Men Who Love Drugs
For me, Oceansize is the sound of early-Aughties despair. For whatever reason, I spent an enormous amount of time listening to their entire discography last year, as it clicked for me in a new way. This particular song, though it's an early one, is representative of a lot of what I like about them... it has the slightly weird tonality, shoegazey vibe, big dynamics, etc.
2. Boards of Canada - Sundown
The most recent BoC album is great because it's a concept album with a topic but it has no lyrics. And it works perfectly! This one track is really short but it's detuned out of concert pitch and has a beautiful melancholy to it without a defined harmonic center or key.
3. Nine Inch Nails - La Mer
NIN's The Fragile turned out to be a huge harmonic influence on the new Rosetta material. The Fragile has a recurring motif of a major tonic chord as part of an otherwise minor progression. That same thing showed up a lot on the new Rosetta record, sort of by accident. This song does that major/minor tension the best; you don't even notice it as dissonance. I've never met anyone who didn't like this song.
4. A Winged Victory for the Sullen - Atomos VI
Probably my favorite currently active band. I think this is the best track on their new LP, with a lot of beautiful variety and interplay between electronic and classical instrumentation.
5. YOB - In Our Blood
The new YOB record has a strong progression from dark to light, which I love coming from a very heavy band.
6. Gorguts - Forgotten Arrows
It's easy to write consonant harmonies because there's so much precedent to draw on. We expect things to resolve in specific ways depending on context. It's hard to write good dissonance. Gorguts does a tremendous job of creating specific moods with innovative dissonance. They build up these hugely complex layers and then let it fall apart.
7. Stars of the Lid - Anchor States Part 3
Favorite song ever. Favorite band ever.

Email ThisBlogThis!Share to TwitterShare to FacebookShare to Pinterest
Etichette: A Winged Victory for the Sullen, Boards Of Canada, Gorguts, Nine Inch Nails, Oceansize, Rosetta, Stars Of The Lid, YOB