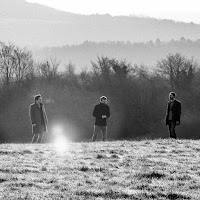 L’Effondras it’s a French instrumental trio. Two guitars, a drum and a dialog between noise and silence. L'Effondras explores and stretches sounds, play with time and emptiness, excitement and frustration. Hypnotic like the few seconds of the deafening peace before the first thunderbolt crack the sky...

1. Steve Reich - Music for Mallet Instruments Voices & Organ
We chose this one for the fantastic ability Reich had to compose pieces that appear repetitive at first but are actually in perpetual motion, like molecular processes. His use of tones is incredible and creates a special space, almost palpable, out of time, constantly modern. I love the Music for 18 Instruments piece aswell.
2. The Gun Club - Mother of Earth
For me it's simply the most beautiful song in the world. The evocations are universally shared, well-identified, classic in a way (endless westward roads, heat, dust, etc) in the collective imagination of the faded american dream. But there is something particularly broken and desperate in this one. It's like a leak, a suffered renunciation, a sacrifice. The pedal steel guitar is fabulous and the lyrics incredibly good.
3. Skip James - Hard Time Killin' Floor Blues (late version)
Regarding to his skills, Skip James could be seen as a prince in the pantheon of the 20s'-30s' bluesmen. He had everything : an astonishing, nimble fingering technique and a clear, beautiful and appealing voice. He could also play the piano. Most people know the story : he was paid a few bucks for his early recordings, lived quite poorly until he was rediscovered in the mid-60s', earning enough money then to pay for his funeral. On this recording he is at the end of his life, but his voice still delivers something luminous and hopeful eventhough the lyrics are sad.
4. Cheval de Frise - Phosphorescence de l'Arbre Mort
The most remarkable thing with this duo is that they succeed in making us forget all the extreme complexity of their compositions, all their technical tricks evaporating to materialize a free-associations poetic field. They compose the way wheatgrass grows. I chose this track because I can't put a whole album here but La Lame du Mat is their summit.
5. Nirvana - Milk It
We could have chosen any song from this band we still love and listen to regularly since our early teen years. This one pushes the limits of its songwriting, including a twisted violent riff, dark tattered lyrics and the creepiest solo ever. One of the best of their last period. Most generally I feel the music of Nirvana as the most upright thing ever made in rock and its purity refocuses myself each time I listen to it.
6. Erik Satie - Danses de Travers (played by Leeuw)
It's pretty hard to explain why I find this piece sublime... What moves through this (the feeling of absence, the breath of time, immemorial stuff, etc) are indescribable things. His work is unlike anything else, isolated from all the artistic movements of his time, but nobody represents this period (Paris end of the XIXth century) as great as he did. Technically, behind the apparent simplicity, each note is essential and his pieces are very difficult to play, all is about interpretation, feelings.
7. Neil Young - Harvest Moon
Because it's the classiest ballad ever.