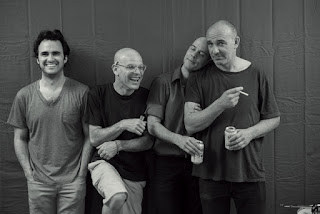 Enablers are a post-punk band from San Francisco, California which features the poetry/spoken word of Pete Simonelli.
In addition to Simonelli, a published poet and writer who was working as a courier in the band's early years, the band's original lineup included Joe Goldring (guitar, formerly of Swans, Toiling Midgets and [concurrent with Enablers] Touched by a Janitor), Kevin Thomson (guitar, Timco, Nice Strong Arm,Morning Champ, and [also concurrent with Enablers] Touched by a Janitor), and Yuma Joe Byrnes (drums, ex-Tarnation / Broken Horse, Touched by a Janitor).
Enablers' last album, The Rightful Pivot, was released on Atypeek Music, Lancashire and Somerset and Exile on Mainstream in 2015 with European tours.


1. Joy Division - Disorder
I first heard it in 1983 in Austin TX in a dorm room. Mind fully blown. That bass line?... give me a break, I could skate to it all day in the Texas sun. The freak singer. Shit. I immediately copied and pretty much worshipped Ian Curtis for awhile.
2. Birthday Party - Friend Catcher
Out of my mentor's 7" collection came this fucking screech of guitar and an animal bass riff. I knew right away that I wanted to play guitar like Rowland S. Howard and I still try to on occasion. HERO.
3. Brian Eno - Baby's On fire
The tune is weird, and lyrically funny enough, but the first time Fripp's solo hits your ears you are done for. I've been getting inspiration off that tone and technique for decades; even tried to straight up copy it with lots of overdrive. Hello? Anybody listening? I'm still waiting for my Fripp "call-out" which can only mean that I am failing.
4. PIL - Pop Tones
From the tape swish intro into the best bass line ever and a totally incomprehensible guitar part this song builds a completely falling down a staircase in slow motion feeling. Evil. This tune is so pivotal for me in so many ways. I don't know Keith Levene and I don't have to; I have this guitar part to thank for many twisty circus riffs.
5. Gang of Four - Damaged Goods
Perhaps one of the most aggressive songs aside from 12XU from that era. That crazy dry-assed production. Raw when turned up. Again, first heard in '83 in a dorm room. I borrowed a guitar shortly after hearing this.
6. Sonic Youth - Tom Violence
This song and this band opened a lot of doors. I was literally about to never play a guitar again until I heard this and suddenly anything seemed possible. My first serious band, "Nice Strong Arm" was oft compared to these greats and rightly so on our first LP. It was truly special to get to open for them.
7. David Bowie - Ashes to Ashes
I taped it straight off the radio in 1980 onto my boombox, missing the first ten seconds or so. The atmospherics were like nothing I had ever heard before and the vocal melody has never left me. I don't know. I can't really listen to it anymore but something about it really wormed into my teenage head.